How can we help?

How good are the sensors in phones?

Some phones have better sensors than others. However, sensors continue to get more and more sensitive with newer smartphones. Our testing has shown that most modern phones in use today can record earthquakes down to magnitude 5 within 10 km of the epicenter.

How are earthquakes traditionally detected?

Traditionally, earthquakes are detected by highly specialized equipment that is installed by field engineers. These sensors can produce high quality readings and are sensitive to the biggest ruptures down to the smallest tremor. However, the equipment is often expensive to create, install, and maintain so many communities are unable to sustain a comprehensive, up to date network.

What is the data that MyShake collects used for?

MyShake uses the data provided by citizen scientists to locate moderate to large earthquakes globally and determine their magnitude. MyShake seismologists can also use this data to learn more about earthquake dynamics in areas without traditional networks. This research could lead to the development of earthquake early warning technology in these areas.

I don’t live in an earthquake prone region, should I participate in MyShake?

Yes! There are few locations in the world where earthquakes never occur. Also, by participating in this citizen science effort, your data can provide a useful baseline against which to compare data from phones in more earthquake prone regions. Your contribution is valuable.

How can you differentiate between my movements and earthquakes?

MyShake’s algorithm uses a neural network to decide which motion fits the model of an earthquake and which doesn’t. The algorithm is already good at this, and as a MyShake user you’re helping it get even better!

Watch our video on how MyShake uses artificial neural networks.

When will I get early warnings?

We are testing early warning delivery capabilities as a pilot project for the US ShakeAlert program. We hope to deliver ShakeAlerts publically across California starting in fall 2019. Lessons learned from this test will enable us to expand earthquake early warnings to other countries around the world. This will happen when the number of users in an area is sufficient for MyShake to create accurate warnings and that a public education and training campaign has been developed to inform users how to respond to the warnings for their location.

Do you have a tutorial I can watch on how to use the app?

Yes. We have a tutorial video you can watch here.

This diagram will also let you know what settings to choose for different app functions: 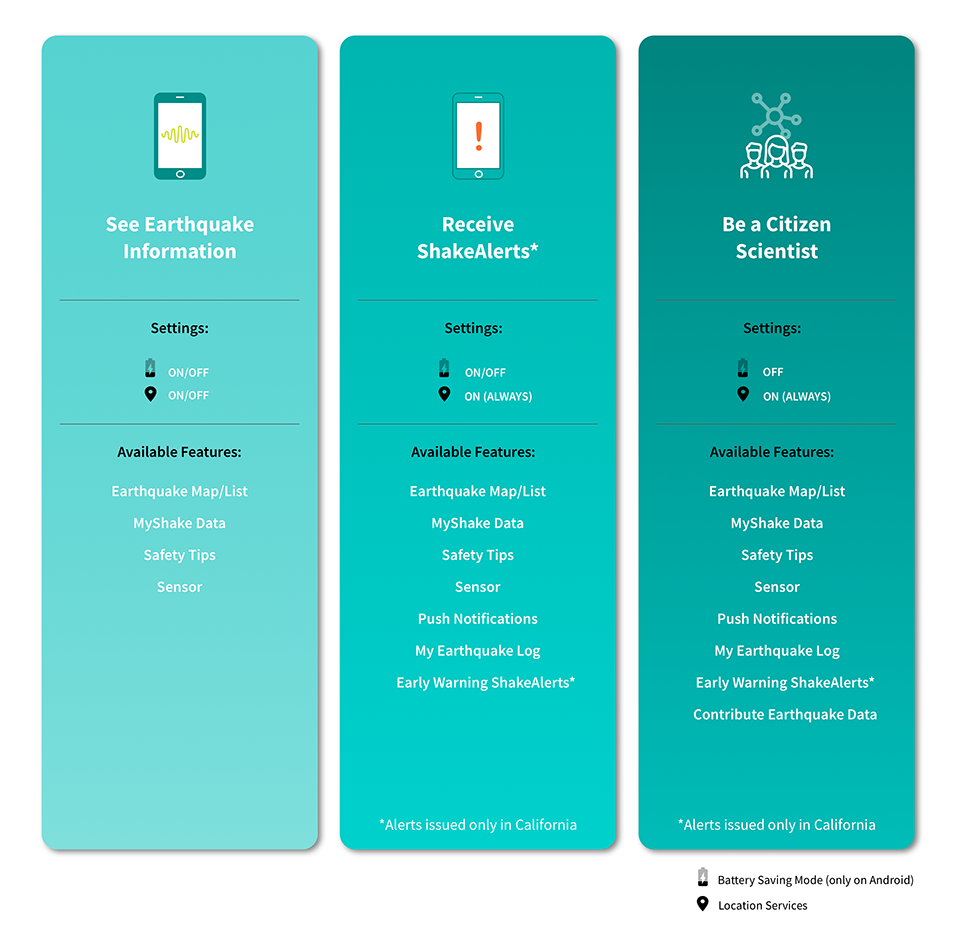 What is the difference between Notifications and Alerts?

How does my phone detect earthquakes?

A phone is ready to start detecting earthquakes after lying stationary for a period of time. Then the on board artificial neural network begins classifying NEW movements as earthquake-like or non-earthquake-like.

Who can submit an Experience Report?

What does the My Data page show?

You can see how you’ve contributed to the MyShake project and look at statistics about the project on the My Data page. Don’t worry if you haven’t been near an earthquake or experienced any since downloading the app, you’re an important part of the global seismic network just by keeping MyShake on your phone!

What are earthquake notifications?

What is IRIS and what is a nonmobile sensor?

The Incorporated Research Institutions for Seismology ingests, curates, and distributes geoscience data. MyShake has partnered with them to give users more information about sensors outside the MyShake network. A non mobile sensor is a high-quality scientific instrument which is featured in the IRIS catalog and used by researchers around the world.

What are early warning ShakeAlerts™?

The USGS ShakeAlert System detects earthquakes as they happen and issues early warning ShakeAlerts. However, these alerts do not predict earthquakes, rather they indicate that an earthquake has begun, and shaking is imminent. Additionally, for every earthquake, regions near the epicenter may not receive a warning before the shaking arrives. MyShake will soon deliver ShakeAlerts to users across California beginning Fall 2019 for magnitude 4.5 quakes and higher, to people in the estimated light (MMI III), or higher shaking zone.

To learn more about how this works, see our tutorial video.

Am I able to receive customized notifications from specific locations?

Yes, currently this is a feature on the Android version where you are able to set up to 3 locations with control over the mile coverage and earthquake magnitude. In the near future, we’re hoping for iPhones to have this feature as well.

How much battery is being used in the background for this app?

The amount of battery used will vary from phone to phone. Newer phones should be able to monitor for earthquakes, and receive notifications with no large impacts to battery usage. Older phones, may experience a heavier usage. For those users, we have provided the option of using battery saving mode. WIth this enabled, earthquake monitoring will only be done when the phone is plugged into power. This does severely impact contributions to the network, so only use this feature if necessary.

[Android Only] Does having Battery-Saving-Mode ON affect the quality of the app?

Yes and No. You will still receive alerts and notifications, and will be able to explore the map with Battery-Saving-Mode ON, but it does not collect seismic data unless plugged into power. This significantly impacts the contributions to the network and our ability to detect earthquakes. We recommend keeping the Battery-Saving-Mode OFF if possible.

How come there are only magnitude 3.5 and above earthquakes reported on the app?

Currently, the global catalog that we pull from is not reliably complete below M3.5, and in some places not even below M4.5. Our solution was to raise the level until we can start pulling from more local catalogs to give people a better experience.

Still have a question?

We’d be happy to help. Email us at myshake-info@berkeley.edu